Stop calling us your future, Young Workers are ready for struggle now

This is a callout to local union leaders.  There is a pattern of exclusion and barriers for new and young workers and it has everything to do with the maintenance of power, hierarchy and careerism within the labour movement. 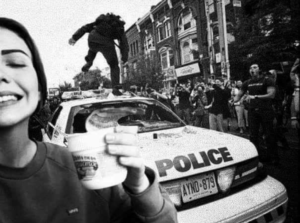 Spend more time encouraging the young workers in your local to get involved and then dedicate resources to the ones who step up to the plate.

So many young workers are serious and passionate about the political dynamics in their workplace and want to get involved.  Most don’t. Most feel like it is an exclusive club or worse, a second boss.  It is crucial that local leadership recognize those interested, just like in an organizing campaign and devote the time and resources to encourage young workers participation.

Here are some of the things that your local can do to make sure that young workers are getting involved to reach the maximum level of worker power within your local:

Local Union leadership has a huge responsibility to listen to what their members are saying but also what they are not saying.  Make sure there is space for people to get involved and you might be surprised who enters it.  Building young worker power means that the ‘Old Boys Club’ has to give some of their power and if they aren’t careful, we’ll take it anyway.